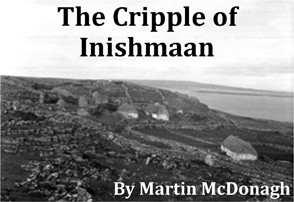 ‘Ireland mustn’t be such a bad place, so, if the Yanks want to come here to do their filming’

The Cripple of Inishmaan is set in 1934, the year a Hollywood film crew arrive on neighbouring Inishmore to film The Man of Aran. Cripple Billy, an orphan living with the local shopkeepers, spinster sisters Kate and Eileen, longs for something to happen in his narrow, restricted life.

When Johnnypateenmike, brings the exciting news that the Director, ‘a Yank be the name of Robert Flaherty’ is searching for islanders to play parts in the film, Billy sees this as a chance to escape.

With a cast of eccentrics who each have their ‘endearing’ characteristics, the Cripple of Inishmaan is a darkly comic masterpiece by the multi-talented Martin McDonagh (Movies: The Banshees of Inisherin, Winner of three Golden Globe Awards 2023, In Bruges, Three Billboards Outside Ebbing Missouri; Plays: The Beauty Queen of Leenane, The Lonesome West, The Lieutenant of Inishmore).

The Cripple of Inishmaan may very well be McDonagh’s finest play …. one of those rare and enchanted productions that will live in the memory of all who see it for years to come – Chicago Sun Times