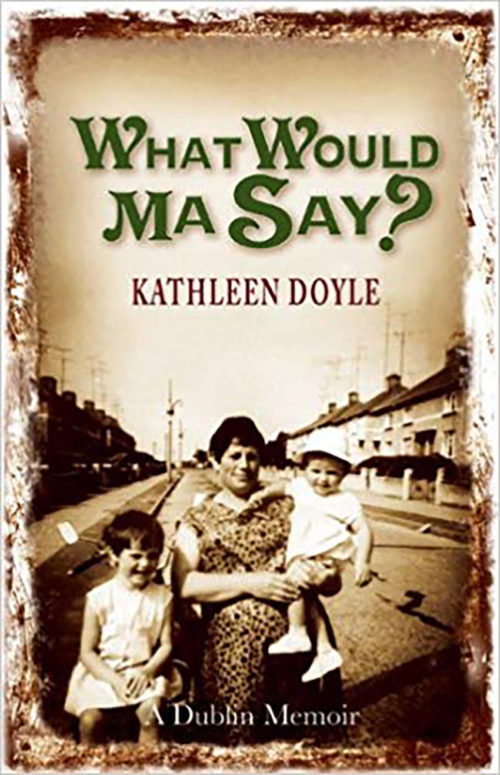 “WHAT WOULD MA SAY” …the book written by Kathleen Doyle and adapted to stage by Gerard Ronan.

Well the cast of, “What Would Ma Say”, certainly delivers hilarity and amusement while receiving lots of laughter from an amused audience. That trait the Irish have with the ability to laugh at themselves even in some of the darkest moments in life depicted throughout. A great display of a united Doyle family was stepped out on the boardwalks of many theatres to display the constant hunger and sometimes hardships throughout the lives of this 1950’s – 60’s Dublin family.
Adapted to stage, Cast and Directed by Gerard Ronan, this brilliant performance brought Kathleen Doyle’s book of her family, to life. Most of us believe that any play can’t live up to the expectations of the book itself but in this case it certainly does. Gerard Ronan expertly plucked through Kathleen Doyle’s book and captured the essence of this family’s life. His conceptualization of the play left the audience under no illusion as to the Dublin of the 1950’s – 60’s. Taking us from Teddy Boy quiffs to rock N roll jives. This performance of art is a consistent natural flow, with the simple set design working so well.
Audiences throughout Ireland certainly felt they were witness to a family’s struggles but not without laughter. It’s like peeping through the window of their lives, the highs and the lows, the laughter and the tears all the while being lost in thought.
A recommendation for those who like a good laugh, the wit of the Irish and a display of unconditional love, displayed only like a Mother can.

“What Would Ma Say”, gives an honest yet humorous glimpse into life in an impoverished 1950s and 60s Dublin as seen through the eyes of writer Kathleen Doyle.

Born into a tenement house in Dublin City before moving out to Crumlin with her family, Kathleen was one of twelve children and was always “the big sister”, she was the one her siblings turned to while her parents Phil and Lil struggled to make ends meet in an Ireland many of us wouldn’t recognise today.

Her mother Lil is shown as the backbone of the family, the one who kept them together while her father Phil worked all manner of jobs to try to keep their heads above water.

Kathleen’s story tells us that despite the on-going hardships that were part of family life back then, she and her siblings still managed to create some fond memories and have a lot of laughs which are enjoyed throughout this fascinating play.