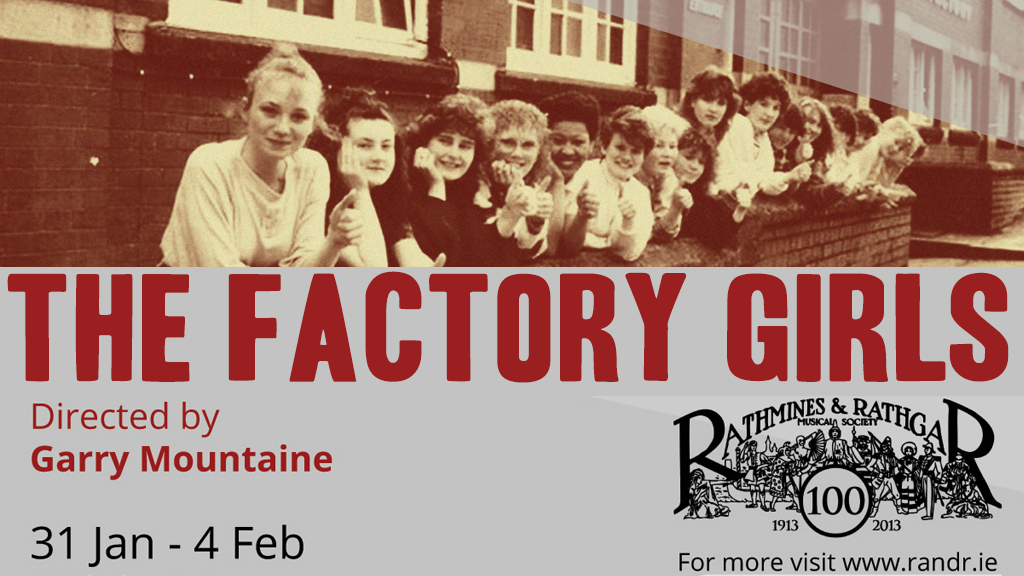 Fri Night is now SOLD OUT

PLEASE NOTE: Row BB has now been released due to demand, this is our extra row and will be the second from the front on the flat. Row AA is the FRONT ROW.

After 103 years of presenting top class musicals and operetta to the people of Dublin, the Rathmines and Rathgar Musical Society has decided to decamp from both the Gaiety Theatre and the National Concert Hall to the dlr Mill Theatre, to produce its first play.

January 31st, 2017 sees the curtain rise on a new chapter in the R&R’s rich history, with its production of Frank McGuinness’, The Factory Girls, running until February 4th including Saturday matinee.

The play charts the journey of five women whose jobs at a Donegal shirt factory are under threat. First performed by the Abbey Theatre in 1982, it was the play that brought its author to prominence.

Set in the recessionary times of the 1980’s, with industrial unrest at the core of the play, it shows that you need to be able to stand on your own feet and take on whatever confronts you. Sometimes, you’d be as confronted from within as much as from without.

With a first class cast of R&R favourites and under the direction of Garry Mountaine, whose critically acclaimed Fiddler on the Roof recently completed a hugely successful sell out run at the NCH, The Factory Girls will make you laugh, cry and maybe even sing……