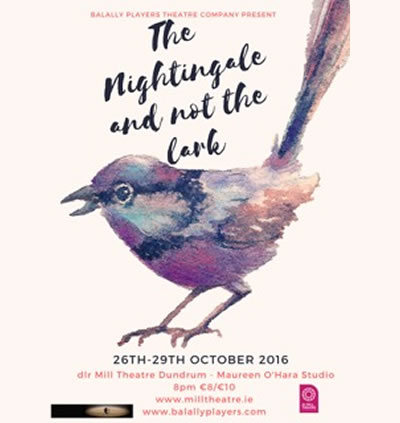 Balally Players Theatre Company present:‘The Nightingale and not the Lark’
By Jennifer Johnson
Mamie, the caretaker of a performing hall, lives in its dusty attic. Taking little care of the building and less of herself, she spends most of her time and money on whiskey and cigarettes. Mamie hears “Romeo and Juliet” which is being performed and it brings back happy and sad memories. In an alcoholic haze– she talks of their days in the theatre to her husband, Owen– rails at him for leaving her for another woman and is torn between hating and loving him. A poignant and thought provoking play.
Directed by Lorcan Dunne
Cast: Doris Cullen, Barry O’Connor and Eimear Smyth
Costumes: Dympna Murray

IN THE MAUREEN O’HARA STUDIO