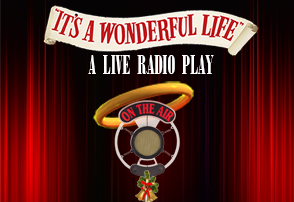 Presented by Sandyford Little Theatre in the Maureen O’Hara Studio.

In 1947, Jimmy Stewart, Donna Reed and a host of other actors broadcast a live radio play of the movie that they had made the previous year – ‘It’s a Wonderful Life’.

It is the tale of George Bailey, who has so many problems that he is contemplating ending it all by jumping from a bridge into the icy waters below.  Clarence, an angel, intercedes to show George what life would have looked like without him. But can he convince George to return to his family and understand that, no matter the difficulties, it really is a wonderful life?

“A crisis in housing, a racist ruling class and a struggle against a hideous ego-plutocrat who names everything after himself – this 1946 classic still resonates.”– The Guardian (2018)

“In its 75 years of existence, It’s a Wonderful Life’s truth still holds up. Despite the omnipresent darkness of the last few years, we have seen time and time again that we are capable of helping each other. Our own lives touch so many lives –  ‘No man is a failure who has friends’.”– The Film Magazine (2021)