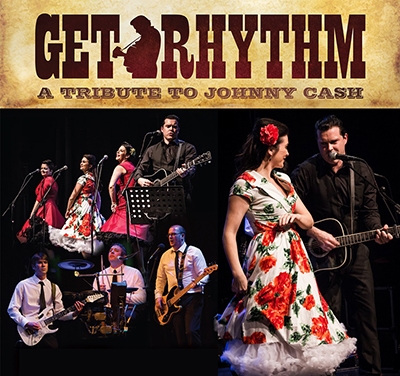 ‘Get Rhythm: A Tribute to Johnny Cash’ are a group of seven musicians from County Cavan in Ireland who spent 4 months in 2013 touring the prisons of Ireland, recreating the prison concerts undertaken by Johnny Cash and his band in the 1960s.

Following the prison tour, this 7 piece band (replicating the classic Cash, Tennessee Three, Carter Family and Carl Perkins line-up) have been taking their performance to venues playing songs from throughout Cash’s career. Paul McCann recreates the role of Johnny Cash and June Carters vocal duties are performed by Louise O’Reilly.

The show has certainly been well received. As well as a headline slot at Electric Picnic and sold out shows nationwide, the band performed in front of a sold out audience at the Slieve Russell Hotel, on the same stage where Johnny Cash himself performed 23 years earlier. Following appearances on national TV/ radio (Ireland AM and RTE Radio), and accolades of support from John Carter Cash and WS Holland (Johnny Cash’s drummer), there appears to be no stopping Get Rhythm.

“almost worth doing time for”
– Independent.ie

“I really enjoyed the show. June would be very happy. Keep up the good work”
– Lyndsey Carter – Niece of June Carter

“An unforgettable performance, worthy of the standing ovation at the end of the night. Can’t wait to see them again”
– Facebook comment

The musicians (who have been playing together in various line ups for sixteen years) have now been performing the show for three years and are dedicated to staying true to the spirit of the performances which they are recreating.