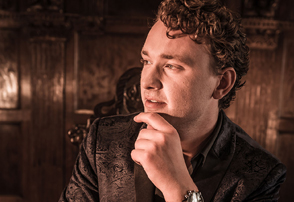 Performing in our Studio, ‘Singing sensation’ Thomas Cameron is a charismatic, Classic Brit Award nominated young English tenor, whose powerful voice has been described as having velvet-like qualities and is making ‘waves in the world of Classical music’ (BBC One).

Thomas has achieved seven number one Amazon Broadway singles and has recorded with the likes of Liz Mitchell of Boney M, Carol Decker of T’Pau, Phil Gould of Level 42, Glen Matlock of the Sex Pistols, Bucks Fizz, Mike Christie of G4 and many others.

With his inimitable personality and performing a number of well-loved songs from the world of musical theatre and classical, Thomas is sure to please many tastes and gives a very special performance to remember.

“As Thomas projects his spellbinding voice you feel your troubles melt away and everything seems right in the world – 5 stars”  Camilla Joyce, Former Express and Echo Reviewer