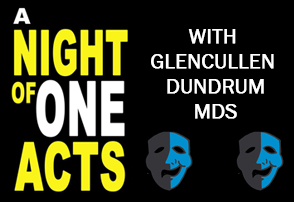 Glencullen Dundrum MDS have pleasure in bringing 3 nights of one act plays to the stage in the Maureen O’Hara Studio:

Lives of Great Waitresses by Nina Shengold.  Director Brendan Phelan-  They say that being in love is a similar experience to when your waitress arrives at your table with your dessert.  So – through the medium of food and beverages –  truly great waitresses can make love to their customers from the start of their shift until closing time. And sometimes to a large table of diners, without ever dropping an order or letting their smile slip. Here, we meet Yetta, Kay, Tammy Sue, and Melissa, who explain what is involved in the lives of the greats!

The Role of Della by John J Wooten.  Director Brendan Phelan- Unless you’re sleeping with the right people, auditions are a necessary evil for actors. Meet Emma and Elizabeth, and witness first-hand just what someone has to go through to get the right part.

Give a Little Love ( On Thursday, Oct 20th ONLY).  Director Fiona Doyle-  When four old schoolfriends meet up again after thirty years at a Bay City Rollers tribute concert it soon becomes apparent that you can take a girl from her teens but you can’t take the teenager from the girl. Old tunes and old flames die hard and live again in this tale of life , music and precious memories.