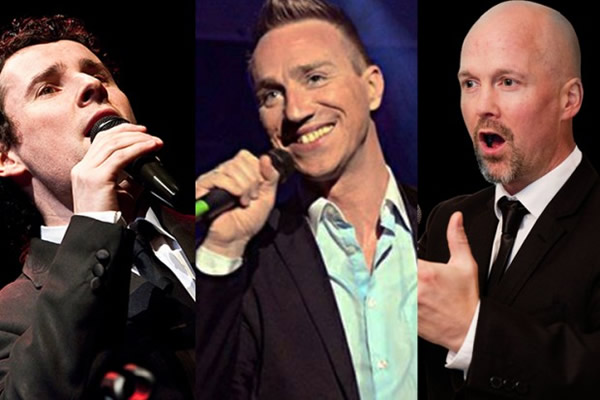 Ireland’s Hottest trio – RTE award-winners Derek Moloney, Dominic McGorian, and Shane Morgan, promise you a night to remember! Introducing new hits ‘Caledonia’ ‘Over the Rainbow’ ‘RUN’ & ‘I don’t wanna talk about it’ (in special arrangements) the trio also include firm favourites  ‘I Believe’ ‘SHE’ and from Sinatra (My Way/New York, New York), Leonard Cohen (Hallelujah), Pavarotti (Nessun Dorma) and The Dubliners – A rousing selection of the greatest Irish Ballads to include (Song for Ireland/The Wild Rover).

This exciting, thrilling, fast-moving concert is packed with the world’s most beautiful, magical feel-good, uplifting songs. Their noted friendliness & connection with their audience makes this event a special night-out.

The trio was the only group selected to perform a unique part for the opening of the 50th International Eucharistic Congress both in the RDS and in Croke Park Stadium Dublin June 2012 before an audience of up to 100,000 people.

Ireland’s favourite trio was the headline act to perform for the sell-out European Premiere for the film “Lincoln” in 2013 sharing the stage with leading stars – Sinead O’Connor, Shane McGowan and Chris De Burgh. Among the attendance were Hollywood stars Daniel Day Lewis, Steven Spielberg and Sally Field (who all singled out the trio requesting to meet them after performance & are big fans).

This year the trio was selected by Irish Government to headline 1916 Centenary State Reception in Dublin Castle, Easter Sunday March 2016 for 3000 special invited guests from around the world.

Come see and enjoy this special concert for yourself!! Easy to watch/Easy to Like! www.threetenorsireland.com

‘The best version of ‘Hallelujah’’
– RTE

‘I would recommend this wonderful concert to anyone–the most delicious box of chocolates your ears could ever have.  Knockout vocal performance’
– New York Times

‘Wow, what a night! One of the  most enjoyable music gigs I’ve ever attended – what harmony from these guys, I was totally blown away’
– Henry in Dublin