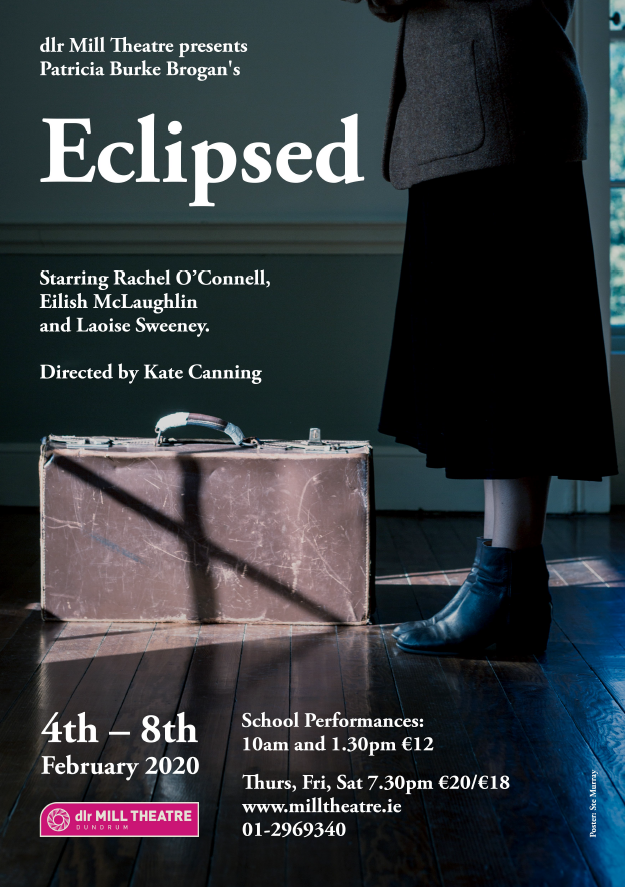 Presented by dlr Mill Theatre and directed by Kate Canning, Eclipsed by Patricia Burke Brogan is an award winning play set in a Magdalen laundry during the 1960’s. When Eclipsed was originally premiered by Punchbag Theatre 28 years ago, the scandal of Ireland’s Magdalen laundries was only just beginning to emerge.

In fact Burke Brogan’s play, tragic, funny and humane, did much to shed light on the day to day life behind the Magdalen walls and the treatment of the girls and women imprisoned in these places as witnessed by Burke Brogan herself.

During her summer holidays, novice and teacher Patricia Burke Brogan was sent to the Magdalen laundry in Galway’s Forster Street to help supervise the women. What she saw shocked her and ultimately played a role in her decision to leave the order. She has remained an active member of the Catholic Church, but never forgot what she had seen these women endure. The result was Eclipsed.

Starring Rachel O’Connell as Brigit and Laoise Sweeney as Sister Virginia, it is one of the first plays to tell the story of the Magdalen laundries and was inspired by Patricia’s own experience as a young novitiate at the laundry.  Her play highlights the plight of four women who struggled to bear the austerity of their existence and desire to break the shackles of this landmark era of societal repression.  This is a poignant, funny, moving and sad play.

Patricia Burke Brogan’s writing is a stark reminder of the brutal intolerance of ‘female deviance’ in our country’s not so distant past, while also being brought on a finely crafted journey of friendship, love, hope and survival.

According to Patricia Burke Brogan, “I was brought into this huge space with these machines – the noise of the machines, the deafening noise – and then out of the haze I saw these women, young women, old women, and they looked at me like I was another of the people who’d locked them up . . . it was like I was in Dante’s inferno.”

Patricia Burke Brogan further cites, “I was given the key, so that transferred the authority to me, and I wondered if I should just open the place and let them out. But most of them had no place to go . . . when I asked the superior why they weren’t let out, she said ‘Oh, if you let them out they’d be back here in no time, pregnant again’.”

Eclipsed runs at the dlr Mill Theatre from 4th to 8th February 2020, tickets are €18/€16 CHECK AVAILABILITY

Dr Sarah Anne Buckley is Lecturer in History at the National University of Ireland Galway and Senior Research Fellow at the Institute for Lifecourse and Society (ILAS). Her research centres on the history of childhood and youth, gender and women in modern Ireland. Author of The Cruelty Man: Child Welfare, the NSPCC and the State in Ireland, 1889-1956, she is current President of the Women’s History Association of Ireland (WHAI), and Co-PI of the Tuam ‘Home’ Oral History Project.