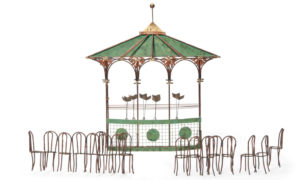 Presented by Rathfarnham Theatre Group Written by Jim Nolan
The Salvage Shop, a drama about the fraught relationship of Sylvie
and his son Eddie has forgiveness and redemption at its core.
Sylvie is dying of cancer but still raging against the local brass band
committee and still holding a grudge against Eddie, who left the
band at a crucial time for its success.
Eddie, meantime, strives to nurse his father; control his daughter and
keep the family salvage business going. Struggling with regret and
guilt he comes up with a scheme involving Sylvie’s idol, Pavarotti.
This heartwarming play is permeated by snatches of powerful
operatic tunes and arias that give the work a mythic quality.